Edit: Dialog
Insert: Yes
Delete: Yes
Action: Sets the major regional, utilization and other MGM options. The Options event may be placed immediately before the first Crop Plan event or just after a Crop Plan event. Options setting remain in effect until another Options event is encountered. This allows options to be set once for several Crop Plans.

In limited circumstances (e.g. when in-growth is expected only in later life of a stand or when the volume loss may change over the life of the stand), it may be necessary to insert an Options event within a single crop plan. If this is required, special care is needed to ensure that the all options are consistent (e.g. inDBH, stump height, etc) and this may require additional editing. When an Options event is inserted within a Crop Plan, no age/year is inserted. To update these and allow editing of the Options event, the previous Establish event must be edited (ending with "OK") so that years and dates are updated. Then the Options event can be edited. Remember also to reset the Options as needed for Crop Plans that may follow the one with special Options. 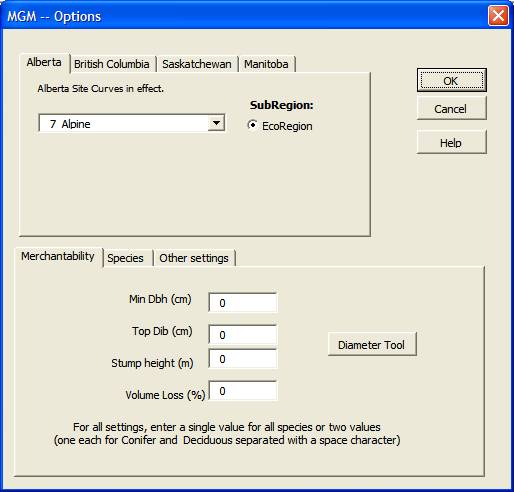 Four regional Variants of are available for MGM: British Columbia, Alberta, Saskatchewan, and Manitoba. Localization features for each Variant include modifications to allow for: species codes, site index curves, tree volume estimation functions, and growth functions or other variations requested by local users (none currently implemented). Currently all Variants use the same growth and mortality functions. It is assumed that species codes for trees will reflect the Region that has been specified in the Options event for a Crop Plan.

Region selection affect the estimation of tree volumes and the height growth indirectly by the local site index function. Since height growth also influences Dbh increment and survival, there will be other differences in growth projections for the different regions.

For variant information for each province, select the desired province:

Top Dib is the smallest diameter (cm, inside bark) that is considered merchantable.

Stump height (m) is the lowest point of merchantable volume.

Minimum Dbh (cm) is the smallest DBH that is considered merchantable.

Yield reports include only trees larger than the minimum DBH; trees with no DBH ("-1" in the DBH cell for trees where height is < 1.3 m) are also excluded. This means that for young stands, there may be no density or other yield values or that the densities may be less than that specified for stand establishment. The stand worksheet includes summary information for trees not utilized.

Short term projections using real tree lists (e.g. for validation) should not require a volume loss reduction for gaps (exceptions might be for a partially destroyed plot).

Long term projections often are based on average conditions or assumed treatments (like planting at designated densities) with a simulated tree list. MGM assumes that trees are uniformly spaced over the stand area. However, when applying yield projections to large areas of real stands, areas of patchiness always appear. These are absent from the theoretical MGM projections. For this reason a reduction factor of 20-30% is suggested for long term projections to allow for the reductions due to spatial variation (gaps) found in real stands. Additional loss due to decay, waste, and breakage may also be added to the reduction due to gaps.

Justification for Volume loss due to gaps in large area stands and interaction with the inputs to the projection: 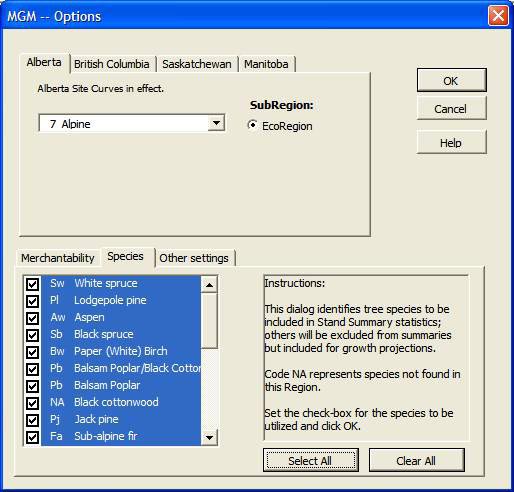 The Species tab provides access to the list of species that may be utilized or ignored. A checkbox setting specifies which species are to be included in stand and yield summaries. Note that utilization is dependent on both species utilization and minimum Dbh. 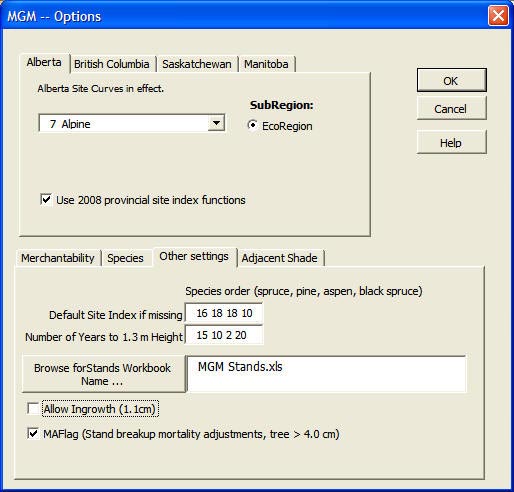 Default site index: a list of 4 site index values separated by spaces, one for each of the MGM species (white spruce, lodgepole pine, aspen, black spruce).

These values are used if site index is not found in stand establishment events.

Number of Years to 1.3 m height: a list of 4 integer values separated by spaces, one for each of the MGM species (white spruce, lodgepole pine, aspen, black spruce).

A list of 4 integer values separated by spaces, one for each of the MGM species (white spruce, lodgepole pine, aspen, black spruce).

If needed, these values are used to fill missing tree age data in stand establishment events.

Checking this box, allows in-growth of trees to occur (the in-growth threshold is currently 1.1 cm DBH) based on the stand age and other characteristics (Qin, 1988). Since this means new trees may be added to the stand, computational time for growth projections can increase substantially. For script development and testing, in-growth is usually left off (unchecked). For additional information see the in-growth discussion under The Model.

These are factors that reflect stand breakup in mainly in Spruce/aspen stands (Yang PhD thesis 2000?). For additional information see the mortality discussion under The Model. 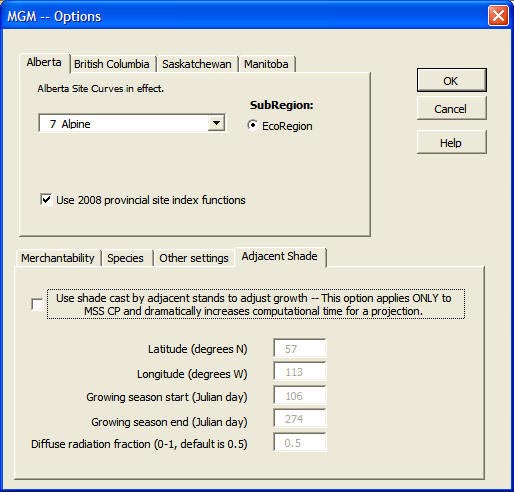